Reflection: Looking in the Bathroom Mirror... 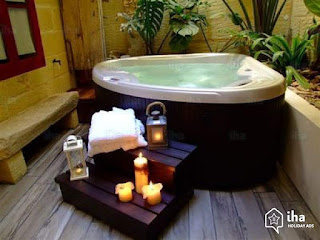 Once in a blue moon, I catch a glimpse of my naked form in the bathroom mirror and the image shocks me speechless…well, for a while anyway. It takes about a minute for my self-esteem to plummet to the deepest fathoms of the ocean as I unwillingly compute what I see.

While never being skinny, over the past fifteen years, the pounds just kept sticking to my body. My tiny waist of which I had been so proud as a young woman, had disappeared. Oh, it’s still there (at least that’s what I tell myself), you just have to use a little imagination. I haven’t seen a flat stomach since my first child was born, although I could mostly still see my … you know, without too much trouble. Not that my kids can take the blame for the sorry state my body was in – I'd stayed on my goal weight until about 15 years ago. Then it all sort of went to hell in a hand-basket.

My pert and alert C-cups morphed into a fairly respectable D-cup over the years, but that was fine as I had more fleshiness to hold on to. Now each D-cup needed steel supports to remain at attention. Gravity or age or both had turned the cute and pert rosebuds from headlights to down-lights and , without me noticing, the air was slowly let out of the balloons.

Having a firm bum was one of the reasons hubby couldn’t keep his hands off it, but lately, the firmness tended to sit lower – a whole lot lower and the nicely rounded bottom looked more like a flat tyre sitting on the tarmac. Add to this the fact that I’m an all-rounder, I saw it fit to sink into a pit of depression. After-all, who would want to get romantic with this blob?

Speaking of getting romantic, some positions just don’t work so well with an extra roll here and there and trying to be acrobatic mostly turns out to be a nearly fatal mistake with something breaking or bending where it shouldn’t. Before I could completely hand my happiness over to the darkness of self-loathing, the bathroom door clicked open.

Hubby entered the bathroom to find me staring at the reflection of my own body – much to my dismay. After grabbing a towel and hiding most of me, I dared looking at him. His eyes held the same twinkle as it did when we were first married nearly thirty years ago and his smile … let’s just say the promises entwined therein made standing and breathing at the same time difficult.

Then I realized something that shook me to my foundation. I’ve been telling myself that I wanted to change my body-image because hubby will find me more attractive. That is the biggest load of bull you can make yourself believe. In my case hubby loved me for ME—not how I looked now, but who I was inside—had been for the past thirty seven years that we've known each other. If I wanted to change my body-image, I must do it for me.

If I don’t want to diet, exercise and torture myself, that’s fine, because the one person that matters in my world, still finds me attractive enough to have that “let’s be naughty” light shining in his eyes. I will never be a size 10 again (yes in my younger years I actually was one) but then again, sweet 16 has been in the rear-view mirror so long that I’ve practically forgotten that it existed.  I’m closer to the half-century mark than I am to forty-five and that’s just fine with me.

Considering what hubby and I get up to at our age, I’m glad I’ve had these moments to realize what is truly important. A soft touch on the bottom, a gentle rub of the shoulders and a whispered promise of something only we could share, is worth more than making myself miserable over gathering the extra pounds and the gravitational effect of nature.

You don’t have to be skinny to have all-guns-blazing sex. You don’t have to be young to enjoy doing so. Your heart and soul contributes more to being sexy than a Barbie-doll image could ever do. So what if you need a Madonna-bra to keep those headlights shining forward. And who cares that you need a corset to find your waist?

I can look myself squarely in the eyes while standing naked in front of the mirror with the realization that I didn’t do so bad after all. I am happy, have a roaring... okay mostly... bedroom routine and above all, I am loved.